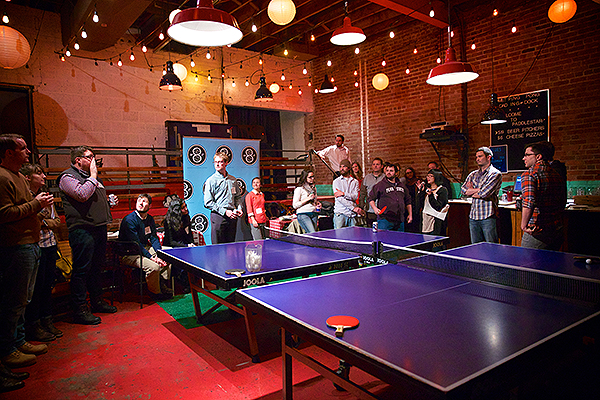 Last night, 826DC held their first kickoff event for Paddlestar Galactica II at Comet Ping Pong. Never heard of Paddlestar Galactica? With a fun name inspired by the hit show Battlestar Galactica, 826DC created a table tennis tournament as a fundraiser and is in their second year of running it. 826DC is a DC based nonprofit organization dedicated to supporting students ages 6-18 with their creative and expository writing skills, and to helping teachers inspire their students to write.

The kickoff event was originally scheduled for Monday, but due to the snowstorm, was rescheduled for Tuesday. Tournament participants, prospective players, volunteers, and friends all showed up at Comet Ping Pong to practice, meet other players, enjoy tasty pizza and beverages, listen to short stories from talented writers, and learn more about 826DC. One of the fun activities was a skills challenge, where players had four chances to hit targets at the end of the table.  Two players tied and had to battle it out in a single tie breaker game to 11 points to determine the skills champion of the night! Congratulations to Gus for winning a very close game!

JOOLA is a proud sponsor of 826DC’s Paddlestar Galactica II tournament, which will be held at U Street Music Hall on March 30, 2014. If you missed out last night, don’t worry! Every Monday before the actual tournament, 826DC will be hosting a practice session at Comet Ping Pong.  Join in on the fun and learn more about 826DC and the tournament at www.826dc.org

Here are some photos from the event!