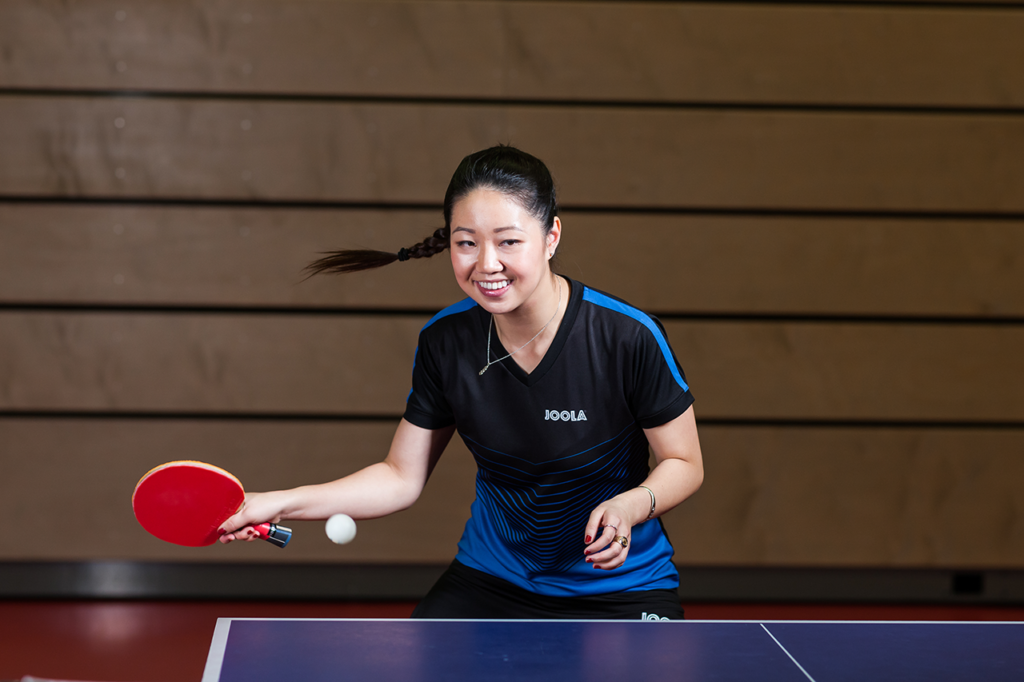 Just days before the tournament was scheduled to begin, Team JOOLA’s Lily Zhang found herself delayed by bureaucracy and almost unable to make the trip to China to attend the Uncle Pop 2019 ITTF Women’s World Cup. Never one to give up, the 23-year-old Californian found a workaround, made her way to Chengdu, and made her way into table tennis history as the first American player to ever make it into the Semifinals of the Women’s World Cup.

Entered in as the wildcard and the 18th seed, Lily, ranked #49 in the world, first made global headlines this past weekend when she stunned the world with her defeat of Japan’s Miu Hirano, who is currently ranked #9 in the world. Hirano had Zhang lagging behind 2-3 in games won, but a defining point by Zhang during their 6th game, recognized by ITTF as the Best Point of Day 2, had the audience going wild and swayed the momentum in Zhang’s favor. Re-energized, Lily easily took the 7th game with a 6-point lead, resulting in the defeat of Hirano, a former Women’s World Cup Champion. With her 4-3 win in hand, Lily progressed on to face Sofia Polcanova in the Quarterfinals.

The Quarterfinal match against Austria’s Sofia Polcanova, ranked #16 in the world, had fans biting their nails on the edges of their seats as they waited to see how this underdog story would play out. In a post-match interview with ITTF, Zhang described Polcanova’s style as “different” and “uncomfortable” compared to what she was used to playing against. The first 4 games had each player at 2-2, but even with the next game going to Polcanova, Lily came back to take the last 2 games, resulting in another stunning 4-3 win that left audiences and announcers speechless.

“I came into the tournament with the sole goal of advancing from the group stage,” said Lily. “I really can’t believe that I ended up winning against world-ranked #9 Miu Hirano and world-ranked #16 Sofia Polcanova to reach the Semifinals.” These hard-fought wins etched JOOLA’s Lily Zhang into the history books as the first US player to make their way into competing in the Semifinals of the Women’s World Cup.

With 2 high-profile wins in the bag, Lily Zhang found herself in the Semifinals, facing her most formidable opponent yet – Liu Shiwen. Liu, currently ranked #5 in the world, previously held the #1 world-ranking for 9 consecutive months in 2014 and 2016. She also had 4 previous Women’s World Cup Champion titles under her belt. One may have expected an easy sweep for Liu and though she defeated Zhang 4-0, Zhang put up a fight and managed to score in each of the 4 games. During the 4th and final game, Zhang fired a counterattack against Liu’s lob that had audiences frenzied with excitement. The point earned Zhang her second “Point of the Day” recognition by ITTF and seemed to impress Liu Shiwen herself. Liu went on to win her 5th Women’s World Cup Champion title, but this electrifying Semifinals match is sure to leave an impression on both players.

Zhang went on to compete against Singapore’s Feng Tianwei, who is currently ranked #12 in the world, for the Bronze medal. With the advantage of a decade more of experience, Feng ultimately took the match 4-1. “Lion-heart Lily” as she has been dubbed, fought valiantly, never facing more than a 5-point deficit. She won the 4th game and narrowly missed a comeback in the 5th game by just 2 points.

When asked by JOOLA about how she felt about the weekend’s results, Lily responded, “I’m unbelievably happy with my performance at the Women’s World Cup! I still feel like I’m in a dream. I feel that I have gained an enormous amount of experience and confidence from this World Cup, and I’m hopeful that this is just the beginning.” Happy and hopeful she should be – even without a Women’s World Cup title, Team JOOLA’s Lily Zhang did not go home empty-handed. In addition to cementing her place in the history books as the first American player to make it into the Semifinals of the Women’s World Cup, she proved to competitors that both she and Team USA are forces to be reckoned with.

“While it may have been a shock to the rest of the world and even to myself, I do feel that this result is a testament to the time, hard work, and effort I put in this year as a professional table tennis player,” said Zhang. Then, in a demonstration of the sportsmanship and poise that has garnered her the respect and adoration of table tennis fans world-wide, she went on to add, “It was also a team effort, as I absolutely couldn’t have accomplished this without the full support of my sponsor – JOOLA, my club – ICC, my coaches, my family, friends, and fans. They have stood behind me through everything and encouraged me to keep fighting, even through the rough patches.”