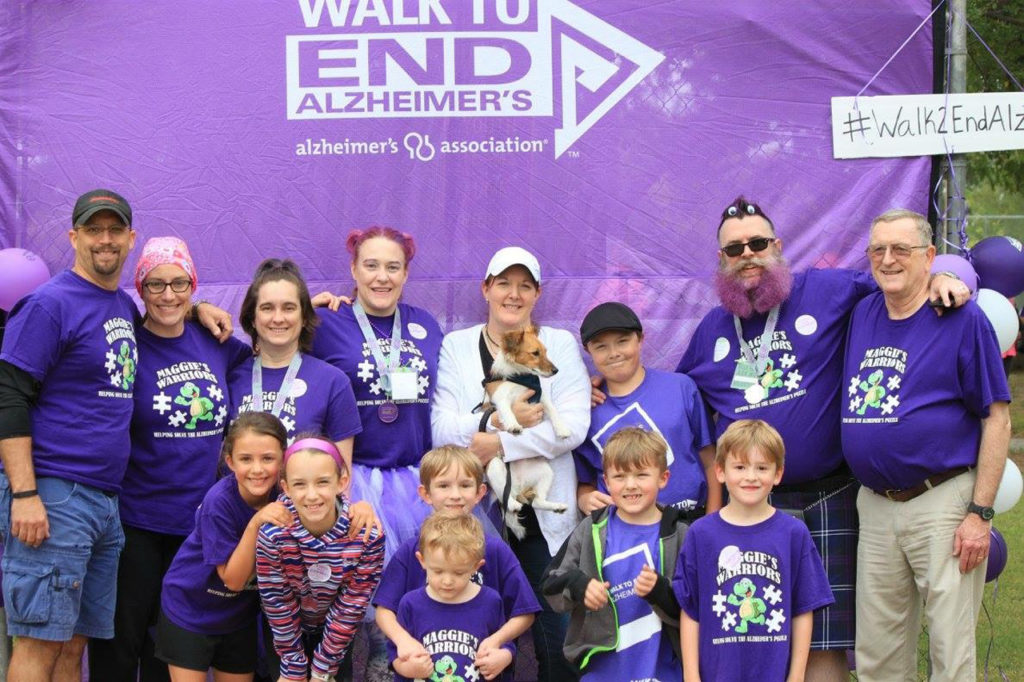 Every 65 seconds someone in the United States develops Alzheimer’s. It is the 6th leading cause of death in the US. Alzheimer’s kills more than breast cancer and prostate cancer combined. In 2018, Alzheimer’s and other dementias will cost the nation $277 billion.

Maggie’s Warriors (on Facebook and Instagram) is a team dedicated to raising funds and awareness in the fight against Alzheimer’s. The Alzheimer’s Association’s Walk to End Alzheimer’s is an annual event that raises funds and awareness to fight Alzheimer’s Disease. The Walk gives people a chance to gather to remember and honor those suffering from Alzheimer’s, their caregivers, and the families and friends of those that have passed due to Alzheimer’s. Maggie’s Warriors is a Walk team consisting of Maggie’s son and daughter in law, Matt and Allison Henry and Maggie’s daughter and son in law, Angela and Timothy Miles. We Walk not only for Maggie Henry, but for all the people past and present who are affected by this horrible disease. We will continue to Walk until we END ALZ.

Maggie Henry was a loving wife and mother. She was a dedicated elementary school teacher of music and physical education. Maggie loved helping others and volunteered with the Girl Scouts of America. She was officially diagnosed with Alzheimer’s in 2006, but the signs were there years before. Her coworkers noticed her becoming forgetful and not remembering conversations from earlier in the day. She would get lost on the commute home from work. Alzheimer’s forced her to retire early from a job she loved. She could no longer do the volunteer work she enjoyed. Eventually Maggie started forgetting to take her medications or if she had eaten that day. Maggie’s husband Robert had to retire to take care of her. As her memory continued to fade, the strain of taking care of her became too much and she was placed into a nursing home at the age of 66. Maggie never knew her 3 grandchildren. She stopped recognizing her children. She passed in January of 2013 at 67 years old.

The Shakehands Pong Tournament is a fundraising event for Maggie’s Warriors and the 2018 Walk to End Alzheimer’s. Shakehands (on Facebook and Instagram) is a free monthly ping pong club led by Jeff Wyrick, where people get together in different garages around town to play ping pong, socialize and foster a sense of community. The July 28th tournament is taking place at Six Car Pub (806-576-3396), 625 S. Polk in downtown Amarilo, Texas and is currently taking donations to register for the event. There will be prizes, gifts sponsored by JOOLA, Six Car Pub, and other local area businesses. The winner of the tournament will win a special trophy, The Silver Terrapin. The tournament will feature a bracket of 48 players and even more spectators. Please join Shakehands and Maggie’s Warriors for a night of ping pong, fun and fundraising. A donation to Maggie’s Warriors can be made using the the link below: