An opponent’s flat, hard block or hit can be a nuisance to return.  You may stick the ball in the net, or in some random direction.

To return these balls well, recognize that you are going to have to generate some spin to control the shot.  So even though things happen quickly, try hard to lift the ball to add some topspin.  Another idea (which requires good touch) is to try a soft chop-block low over the net, aiming for control rather than power.  If you can pull this off, you may deny your flat-hitting opponent the spin he needs to control his next shot.

Something similar can be done away from the table through a chop return without much underspin.

Regardless of the particular method you choose, returning a flat, hard ball requires special handling.  Just sticking your racket out to block won’t get the job done.

Carl Danner is a rare gem you find in table tennis. As a former nationally ranked and rated player, he offers a lot of insight into the game, especially when it comes to understanding the physical mechanics, movements, and techniques involved in becoming a better player. Director and Secretary US Table Tennis Association Foundation from 2004 to 2008 and current USATT High Performance Committee Chair, Danner is passionate, qualified, and committed to growing the sport of table tennis. 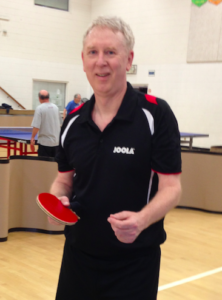