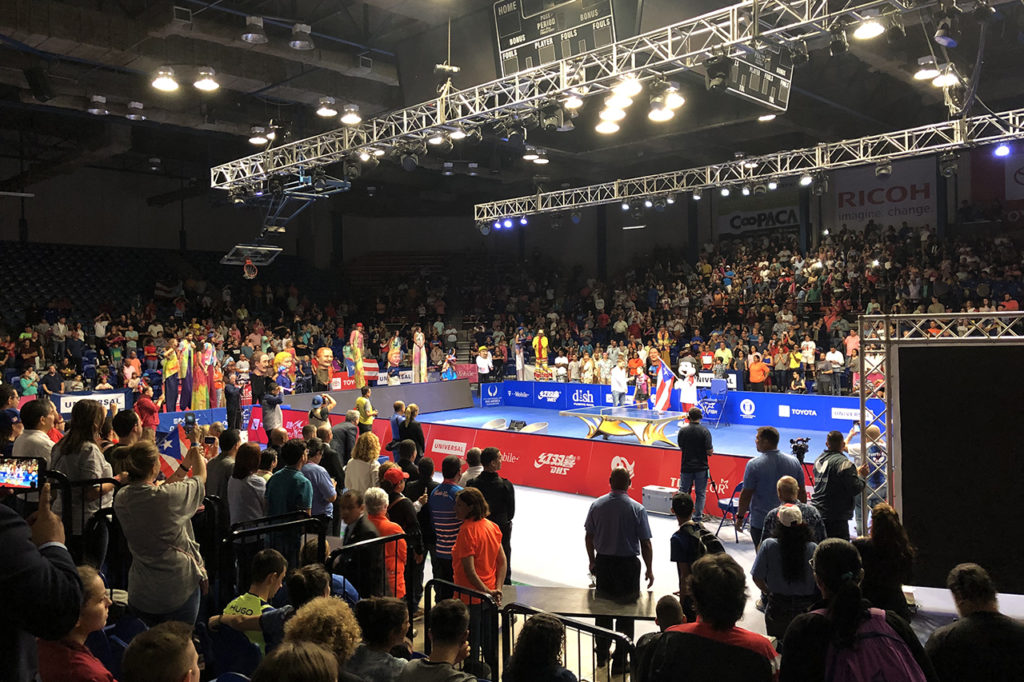 My second official competition of the year commenced with the Universal 2019 Pan American Cup held in Guaynabo, Puerto Rico.
Even with the slight hiccup of dealing with a stomach virus for a week prior, I had almost a month’s worth of professional training in Europe under my belt and felt much more in shape and prepared for the matches ahead. After all, I practiced more in this one month than I had in the entire last year – the results of this tournament should easily reflect that, right? Ranked fifth seed in the competition, I first had to play the qualification groups. My first match was against Judith Morales of Chile and my second match was against Mabelyn Enriquez of Guatemala. Both matches went rather smoothly – I won 4:0 in both and felt confident in my game.
However, my next match proved to be significantly more challenging. I faced the first seed, Mo Zhang of Canada, next in the quarterfinals. Mo and I have known each other for forever and have played against one another countless times. We know each other’s games and styles down to a tee, so really anything could happen.
The match began with tight back and forth points. We were just feeling out each other’s game and strategy in the beginning, but she edged me out in the first game 11-9. I won the next 11-8, but still wasn’t quite feeling all there. Each subsequent game was extremely close, but she won the next two 14-12 and 11-8. Suddenly, I was down 1-3, but had the strange feeling that I wasn’t even warmed up. My hands were cold and shaking and I had never felt so frustrated. What was going on? During the time-out in between games, my coach, Jörg Bitzigeio, commented that I looked awfully tense out there and gave me the simple, but effective advice to just relax and play with confidence. Acknowledging that he was right, I decided to put aside any reservations and personal pressures and just approach the match point by point. Luckily, this strategy worked, and it became obvious that I started moving more quickly, playing more aggressively, and outwardly showing more fighting spirit. I was back in the game, winning 11-9 and 12-10 the next two games.
With the momentum on my side, I felt hopeful and self-assured going into the seventh. But perhaps, a little too confident. I powered through, trying to win the points immediately and instead, began rushing excessively. I didn’t give her a chance to even make a mistake. The last game flew by quickly, ending with her taking the game and match 11-6, 4:3. That was it, I was knocked out of this competition, as well from contention to compete in the Women’s World Cup to be held in Chengdu, China later this year. Two years ago, I had won this competition and now I couldn’t even get past the quarterfinals.
My ego bruised, I felt beaten and discouraged during the entire bus ride back to the hotel and for most of the evening afterwards. I must admit, I had rather high expectations coming into this competition and was disappointed that I didn’t fully perform. I wanted to start my professional table tennis career with a bang and this loss simply wasn’t part of the plan.
Looking back now that I’ve had a few days of reflection, I realize that it’s essential to have way more patience with myself. Table tennis, or sport in general, is a learning curve and things most certainly don’t always go your way. Cheesy as it sounds, success cannot be achieved without failure. Yes, this competition was disappointing, but I want to reframe the situation in a more positive light. Rather than ruminate and bottle up any negative emotion, I’m now focusing on analyzing the match more objectively and moving towards the future with new lessons. After all, results take dedication, hard work, and most of all, persistence.