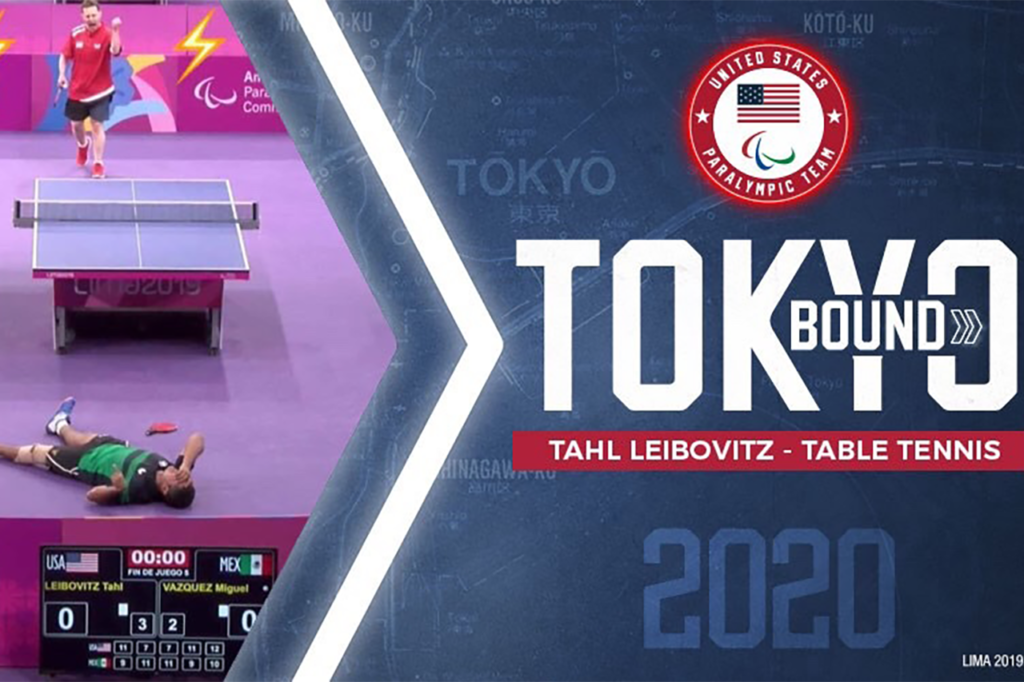 In Lima, Peru I was very fortunate to have successfully defended my Class 9 Para Pan Am Singles Gold over Miguel Vazquez of Mexico. Going into this event it was very clear that Vazquez was going to be my biggest challenge as we faced off four years ago for the same Gold Medal.

In Toronto, I was trailing 5 to 2 against Vazquez in the fifth game in order to qualify for Rio. Facing sure defeat, I paused and reminded myself that this one match wouldn’t define who I was as a person. My wife Dawn Leibovitz and dog Memphis would be there when I returned home, my coaches and teammates would know I did everything to win, and my Life would virtually be the same regardless of the outcome.

Before my next serve, I remembered a particular match of one of my Project Table Tennis teammates Jimmy Butler. Jimmy had come out of retirement to win his fourth men’s singles title at the US Championships, but found himself trailing by a large deficit in the final game of the finals against Kunal Chodri. What Jimmy did was to focus on the next point and eliminate the concern for being so late in the match when most people would begin to panic. I used that same mindset going into the final game.

Instead of focusing on the outcome I remained calm and focused on the next point without fear of failure if things didn’t go my way. I caught the momentum wave and Vazquez crumbled possibly due to the self-induced pressure.  It was such a stunning loss for my opponent in 2015 that he quit the sport until a year ago.

Fast forward to Lima Peru. I was leading 9 to 6 in the final game for a chance to go to Tokyo. Things were looking pretty good. Three points later at nine-all, Vazquez got a net dribbler to go up 10-9 and gain a match point. Instead of getting totally frustrated or losing my cool, I decided to go back to what worked in Toronto.  I stayed calm, smiled inside and reminded myself not to worry about the outcome of the match. I even said to myself if he wins maybe it is his time as it was it was mine last time.

What one of my coaches and I have often discussed was how Werner Schlager beat the Chinese in Paris to become the 2003 World Singles Champion. In two of his matches he upset Chinese opponents when they had match points against him. The lesson I took from that event was that someone will often let down their guard when they feel no pressure on the next point.

I knew down 9-10 that the match was far from over. While my opponent might have felt a sense of relief after being down 9-6 and now having match point. I knew I had one thing on my side, I could handle a loss and he couldn’t. My coaches and I discussed this very point prior to arriving in Lima.

I played at the Lily Yip TTC and worked on this mental outlook in the league matches right before the Para Pan Am Games.  It took a few tries but those matches made it possible for me to have the confidence to execute my mental plan. When you can play stress free, it is so liberating and fun. The challenge is to be willing to leave everything on the table and have no regrets.

Personally I have found for myself the difference between being a true competitor and wanting to just win is this type of mindset. It wasn’t something I always had. I believe my prior matches as well as my daily work as a social worker has made this approach so clear in my mind.

Three successful points later, I went to the barrier to pick up my opponents match ending long return of my serve and found him on the ground weeping uncontrollably. I wish we both could have won but that’s not how sports work. I felt for him as he played great and staged a great comeback. However, I knew to play my best I had to be stress free and I executed my plan successfully.

I ran into his disbelieving coach later in the evening after drug testing and joked that I would be ready for our next meeting in 2023.  He didn’t think it was that funny at first but later cracked a smile and said he wasn’t sure he could handle another final like we just had. He actually called me his worst nightmare!

Our Para Team is a family and we always fight for each game one point at a time. We thank all our fans sending us well wishes via Facebook and text messenging. Let’s Go Team USA!