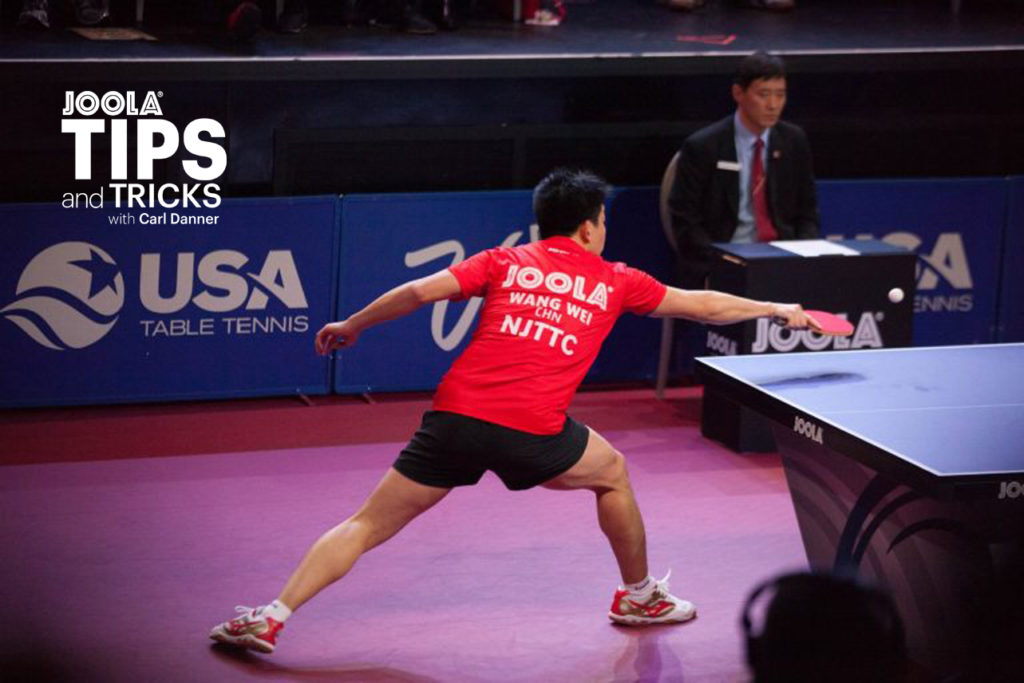 Tips and Tricks with Carl Danner: Try a Little Defense

Defense isn’t just chopping or lobbying — it applies any time that you are just keeping the ball in play without attacking yourself. In that way defense is almost a state of mind, as much as particular strokes.  Defense can win or save points not just through errors by your opponents, but also through taking pressure off of your game when trying to return your opponents’ attacks.  And, you can place added pressure on opponents if you can switch to offense when the opportunity presents itself.

The defense state of mind starts with giving up any ambitions of attacking, at least for some part of the point.  This lets you relax a little and focus on returning your opponent’s shots safely.  For example, think about how well you can block loops or topspins in practice rallies, when that’s all you’re trying to do.  In a match, make one further adjustment by aiming your blocks to locations away from your opponent’s strong shots.  As long as she isn’t hitting consistent shots you can’t handle, you’re fine and can extend the point as long as you like.  After all, she’s doing all the work!

Pushing is another tactic more useful for defense than offense.  Here again, you don’t mind that your opponent tries to attack, so long as it is from a weak position or in a way you can comfortably return. Experiment with different depths and spins to find the most awkward positions for your opponent.  Deep, no-spin pushes often help because opponents might lift them off the table, and because less spin from you means less topspin received back when they do land the opening shot.  You might be surprised how many errors result from trying too hard to stop your opponent’s attack, and these can stop when you permit it to occur in a controlled way.

If you have the touch, a further option is to take a step back from the table and consistently topspin the ball back deep.    So long as you aren’t trying to do too much with the shot, this can be surprisingly easy.  Go repeatedly at your opponent’s body to cramp their strokes, and don’t be afraid to aim fairly high over the net to get the required depth.

Finally, a good series of defensive shots often results in a weak return.  Have a mental on/off switch to use when you see a ball that’s just too attractive to ignore.  After you flip the switch and pound that winner, flip the switch back and play consistent defense some more.  Not only will you win the point, but the threat of offense will force your opponent to take more chances and perhaps make more errors.

Give a defense state of mind a try in your next practice session.  You might find a new way to earn points, and have a little fun at the same time!

About Carl Danner: Carl Danner is a rare gem you find in table tennis. As a former nationally ranked and rated player, he offers a lot of insight into the game, especially when it comes to understanding the physical mechanics, movements, and techniques involved in becoming a better player. Director and Secretary US Table Tennis Association Foundation from 2004 to 2008 and current USATT High Performance Committee Chair, Danner is passionate, qualified, and committed to growing the sport of table tennis.